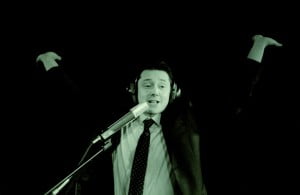 “According to the official press agency, the President will address himself to the Nation. Of course it’s not the first time, in History, that a President speaks to a Country. There. The President will speak. What’s wrong with that? What’s going to happen? If you recognize his voice, you will understand.”

Third stage, after the radio drama “To the Nation” broadcasted by Rai Radio3 on 2011 November 26th, of a long theatre project by Fanny & Alexander dedicated to the speeches addressed to a community, “Speech To The Nation”the radio drama explores the forms and rhetorics of the official political interventions. Playing with the commonplaces of radio oratory and bringing out the potential of words immersed in a deliberately surprising and intricate dramaturgy, Marco Cavalcoli, formerly virtuoso interpreter of the ventriloquist Wizard of Oz, embodies as if in a concert a mysterious President performing, among the many past and present reverberations of an indelible historical memory, an important inaugural address to be pronounced to the Nation.
“Speech To The Nation”, a study for “Grey Speech”, has made its debut in March 2012.
The project on the Speeches includes six shows-monologues in the next 3 years and involves, besides Marco Cavalcoli, the actresses Chiara Lagani, Francesca Mazza and Sonia Bergamasco and the actors Lorenzo Gleijeses and Fabrizio Gifuni.