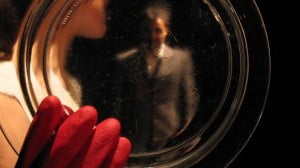 With Alessandro Miele and Consuelo Battiston

We wanted to do a show on Judgement Day.

We spent time and energies to figure out in which damned’s category we had to insert our main characters. We finally realised that, as representative of our race, their destiny could only be the one of the sinless “indolent” .

Then we found the single reagent of the plot: a misunderstood revelation that brings to delirium.

We also had an intuition on one of the possible shapes of Ermes, messenger of revelation.

That’s not all: there was an idea to give substance to our invisible undertow, and to show the instant reaction of our anti-heroes in that mystical encounter!

Well, it would have been a masterpiece able to fell humanity’s reaction under process, while awaiting its own judgement. The awareness of being observed by someone, of having a big index finger pointed at your face. The real feeling about a superior Authority who had chosen us, nothing more than a dry branch of evolution on Earth.

All of this would have be given through moderate special effects and a bunch of excellent actors.

But we needed an elephant, that our production didn’t want to buy.

So, we did something else.

“And the eyes of them both were opened, and they knew that they were naked.” (Genesis 3,7)

Labored under a straight control, the two wretched ones have to face a Destiny’s joke.

All the strategies to force it are vain.

They have no rest.

They are always under control.

What’s left to do?

Hide, under your eyes.

a glance across the street

at the lighted window

where others are living,

and the benumbed feeling

of missing out on something” (H.M.Enzensberger)

What is it? I don’t know exactly, but being aware of it is already something. Isn’t it?

This party is an extreme attempt to fill a gap; it is a research of an evergreen traffic light; it is the suppression of an inexpressible dislike.

This party is strong as a shake of hands, but here a doubt arises: why?

A cynic Traffic light hangs over the stage and the Ring bell as gentle as always tremendously in time keeps the order of a domestic space. Beautiful colored gifts and cards from friends are warmly welcomed in the house. However, nobody comes to the party. Or, better, essential parts of bodies come over: an hand to shake, a cheek to kiss, a chest to hug. Anyway, the party goes on: a ritual joke is told, a tower of biscuits is served, and a number of “innocent” plates are destroyed.

And, suddenly, unexpected thoughts, doubts, and memories emerge from the shadow.

“But you are not aware,

I open my eyes and I see what there is”